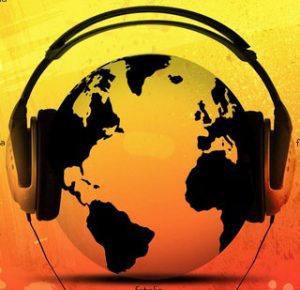 Music of India, including Bollywood

Music of Thailand, Inupiaq Music, Songs of the Tlingit, Saami Music, Music from any one of the Polynesian Islands, including Hawaii. Aboriginal Australian Music, Greek Folk Music, Klezmer Bands, Traditional Music of Korea…..etc.

Do be aware, that Western Music can be found in most parts of the globe. Just because the lyrics are in a foreign language, doesn’t make the music necessarily global. You will need to focus on the aspects of music that are particular to a region and culture.